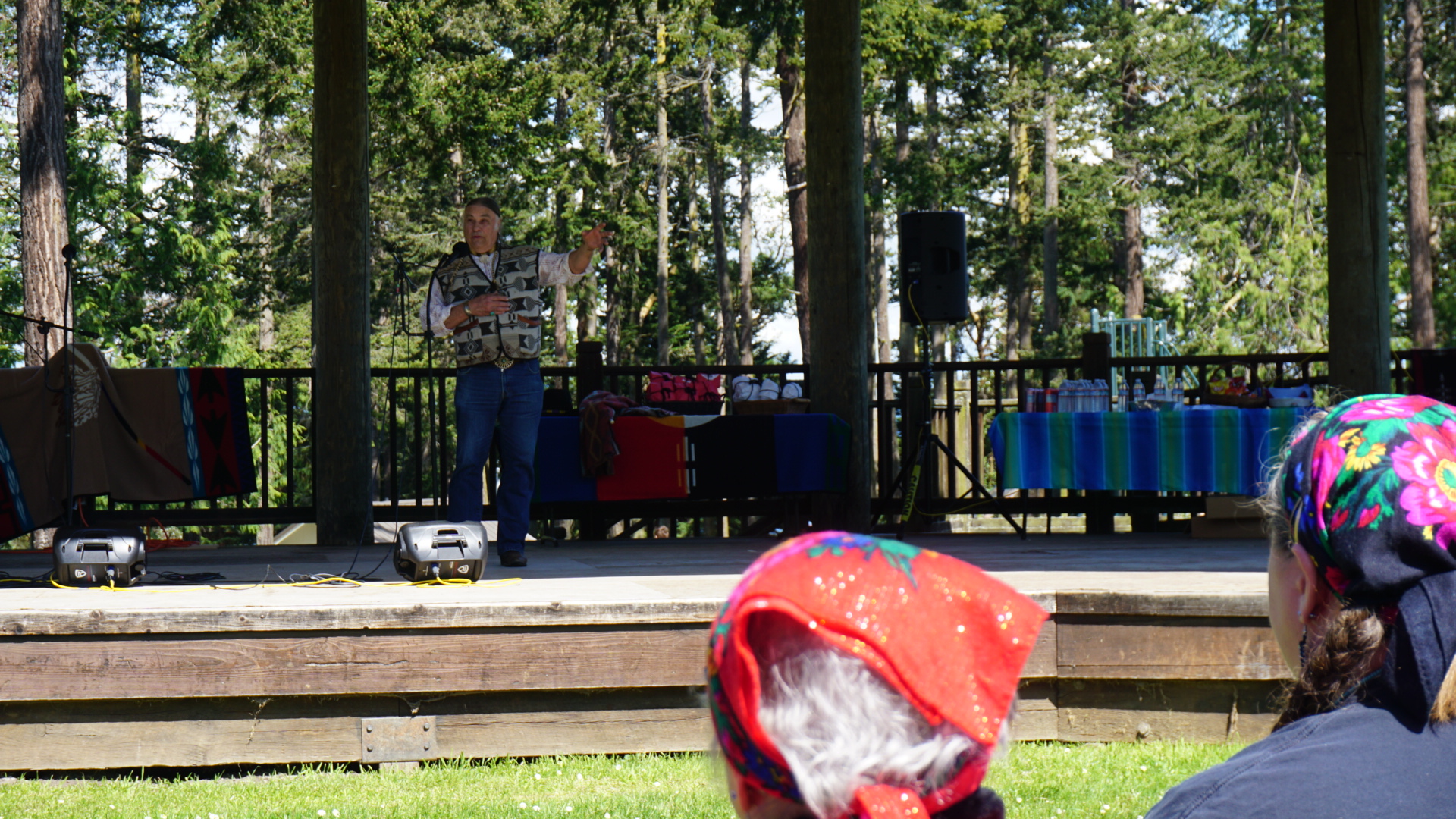 Rosie Jones, festival president and opening ceremony leader, announces LaBombard’s storytelling and the crowd, gathered around the amphitheater on benches and lawn chairs, pique their attention to the stage.

“We would love to welcome back Lou LaBombard, a Penn Cove Water Festival veteran, who has been with us for the last 24 years,” said Jones. “He is here, as most of you know, to engage in storytelling, from his own Native ancestry to tell stories collected around the world. Please welcome, Lou.”

A silence falls over the lawn. LaBombard, with a soft voice, says a hello as children’s voices echo from the playground. He begins with an introduction and continues into creator myths, tricksters and folklore; finishing with his favorite story, The Story of the Jumping Mouse.

LaBombard’s own story holds several twists of fate. While he has lived in a variety of places, he has called Whidbey Island home for the last 33 years. Fishing, hunting, and farming narrate Lou and his wife’s time in Coupeville, a town on the Northern side of the Island.

“When we moved and drove across Deception Pass she [his wife] said, ‘I think we’re home.’ And we have been home ever since,” said LaBombard.

Home has meant many different things for LaBombard. After many years of moving from Italy, Spain, and Japan, LaBombard and his family finally settled down in Boca Raton, Florida, where his father had acquired pieces of land.

LaBombard entered high school and continued on to Florida Atlantic University as a first–generation student, receiving his Bachelor of Arts in Sociology. Soon after graduation caps were thrown, LaBombard was drafted to serve in Vietnam.

“I served a term in Vietnam where I was trained as a medic and joined the U.S. Air Force as an airborne paramedic,” said LoBombard.

After his term was finished, LoBombard was discharged and stationed in Texas where he continued his college career and married his first wife.

Family and culture were important in LoBombard’s home life. Stories from his mother and grandmother were told and retold.

As LaBombard reflects on stories of his mother holding him during powwows, he recalls the stories his father could not remember.

“When I was in my 40s, he was asking me about his culture, and that really hurt,” said LaBombard. “So I made it my life’s work to bring this information to other people.”

Several degrees later, including a Master’s in Sociology and a Ph.D. in Anthropology, LaBombard’s statement holds true. As a professor at various colleges such as Navajo, Saint Mary’s University, Alamos College, and  Skagit Valley Community College, LaBombard also pursued storytelling outside of the classroom: around the firepit and on stages for attendees of the Penn Cove Water Festival.

“Everyone has their own stories, how they got here, how things came and passed, what kind of things were developed as a cultural explanation of how things really came to be,” said LaBombard. “All of us have a story. If you can learn something from a story, then you’re a fuller human being.”

For LaBombard, storytelling fulfills a calling to educate others, engage with people and spread awareness of the lives of Indigenous peoples around the world. Even more, LaBombard engages with a variety of people.

In recent years, cultural recognition and cultural knowledge have been called to importance. In the case of Seattle and King country, residents now reflect on the original owners, the Duwamish tribe, of this land.

This narrative, familiar to LaBombard, has been explicitly tied to his call to storytelling.

“History is a story in itself. History sometimes becomes a real problem, because history is not the real story. The truth hurts sometimes. You can’t just gloss it over. It bothers people to talk about that, so we don’t want anyone to feel hurt. But we have to look at history for what history was – both sides,” said LaBombard.

Nowadays, LaBombard is retired and no longer teaches at Skagit Valley Community College. But storytelling still plays a big role in his life, whether it is listening to others tell stories or on stage at the water festival.

In his experience as a storyteller, LaBombard has articulated words to life as he steps forward into conversations with others.”

“If you want to be a storyteller, you have to listen too. And if all the stuff that I have done in my life can help someone else, then I am an open book.”