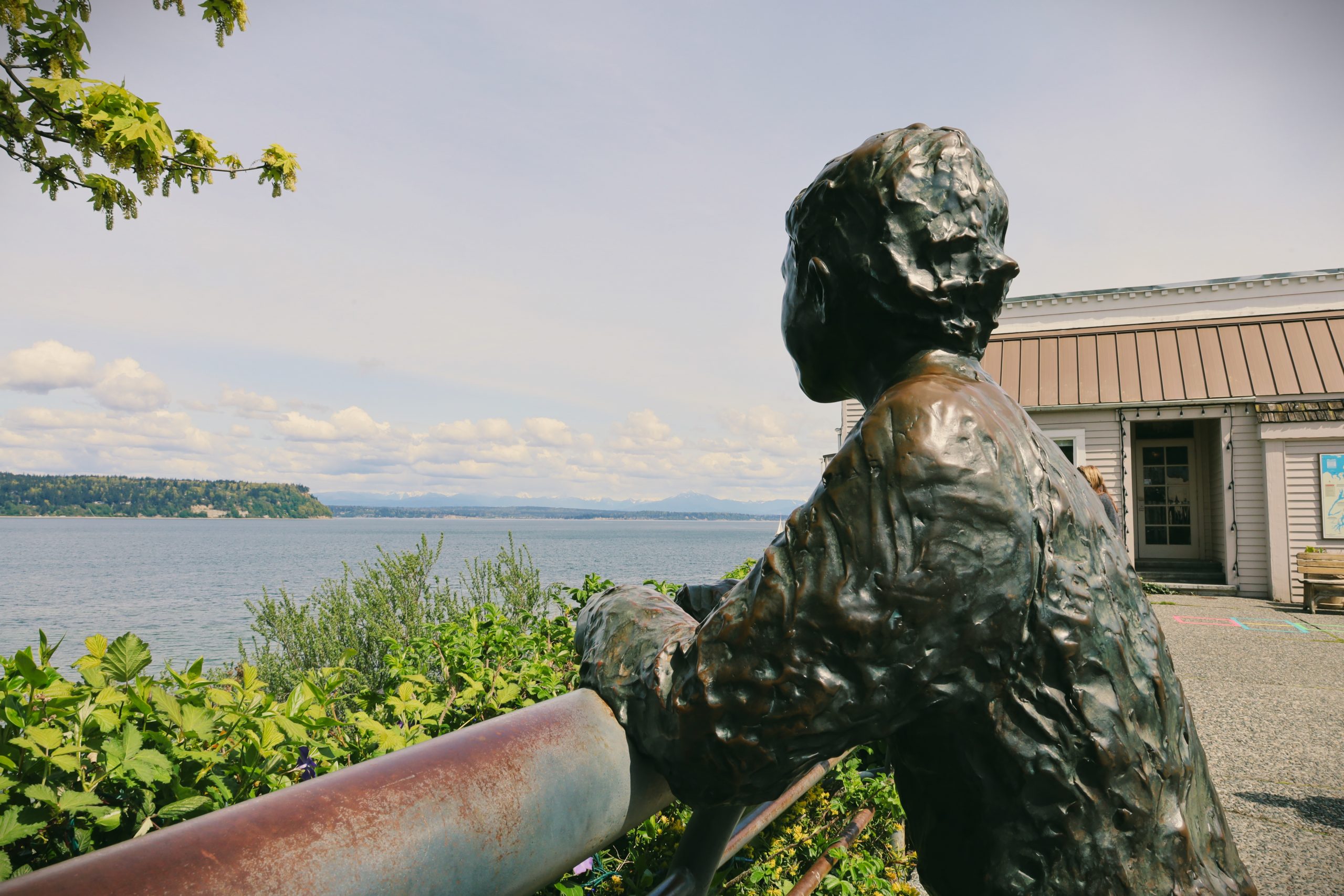 The Statues of Life

“I like my sculpture to invite an interaction with its audience. This is often meant to be a direct physical interaction, but always I strive to engage the viewer’s imagination. I tend to present an incomplete visual narrative; a story is suggested, a feeling evoked, and the viewers find themselves providing details.”

Rachel, the Piggy Bank, was one of many exciting landmarks that have stayed fascinating to me for a long time. The simple yet detailedly alive sculpture invites people to interact. I wanted to touch it as if it is a friendly piggy.

Georgia Gerber is the creator of Rachel the Piggy Bank. She recalls the project she participated in to raise money for the social service agencies in the Market, which was a part of the Market Foundation’s mission to nurture the Market community.

“It was an open perspective project that welcomed every artist to contribute ideas to make a piggy bank representing the fundraising for the Market Foundation,” Gerber said. “Some people have elaborated thing where people drop a coin, and it drops somewhere. But they canceled that for some reason.”

Gerber combined both ideas by making a life-sized pig into the model of a piggy bank.

“My initial idea was just a pig and a girl sitting on his back. Something kind of fun, and people can come by and play with her,” Gerber said. “But then it came back with people saying that people may not know to put money in it if it’s not presenting the bank. So we have reapplied to make [a piggy bank] an actual pig, so I just did a life-size pig like the pig down the road.”

Gerber shares that she used to live and work in Seattle, but the increasing traffic affected the process of her work. Therefore, she moved her studio to Whidbey, which is now next to her house. Gerber wants to be closer to the environment and retain the quality of quietness that she needs during her art production.

“Seattle is very different now compared to when I just arrived. The city is very liveable. I just used to grow up in the country and want to get back to the country, so we moved out here,” Gerber said. “Working mostly with animal sculpture, the environment at Whidbey definitely enhanced that.”

“It’s so much community, art, and the environment,” Gerber said. “We have a very strong community. People help people, and neighbor helps neighbor. It was a great place to raise a family.”

While the boy is looking out the beach where it has a tremendous view, the dog lies next to him with a ball in his mouth looking in a different way. I noticed the distinctive perspectives between these characters, so I asked Gerber about her intention in this installation at the Boy and Dog Park (which is also named after the artwork). Gerber says that she had to take measurements and even redid the fence part in order to achieve the look.

“So when people look into the water with the boy’s perspective, perhaps it might be like shunning, so we have the dog looking back to the group. It kind of fills the whole cycle of looking at the people and looking onto the water. Being a part of the observation needs to come to both ways so.” Gerber said.

The dog was sculpted in the image of Gerber’s older dog from her college years.

“He was my older dog from all those college years and he loved and loved to play with balls,” Gerber said.

Gerber has displayed many of her sculptures in Washington and Oregon. She is happy to see the public audience continues to interact with the sculpture, especially children. When asked to elaborate on the quote that she had shared in the headline, Gerber said:

“There are a lot of public works that I did to have a missing piece or it was designed in a way so that you can go ‘huh?’ and then you walk up to it. And then, you as the viewer can become a part of the piece. The interactive part of it is really important to me. I want [the audience] to touch, to burnish it.”

In a mediated world, people sometimes forget to take time to appreciate the environment. By creating a space to interact, Gerber’s artworks invite the viewer to pause and join in with the environment.

“I think the art pieces that are interactive staying with the viewers’ heart and mind longer. I really love that my pieces have become a part of the environment and enhance the lives of people who interact, especially children. I have made some dancing animals with their empty hands so the children can join in or so.”

Early Sunday morning, we drove across Whidbey Island from Camp Casey to Clinton to meet with the artist. It was the last day of the trip to visit Whidbey and the SPU’s campsite. Before we departed her house, Gerber did not forget to remind us to drive back to Seattle through Deception Pass. By traveling that way, we wouldn’t experience the hassle of the Sunday ferry and perhaps have a chance to appreciate the natural beauty of the island for the last time.